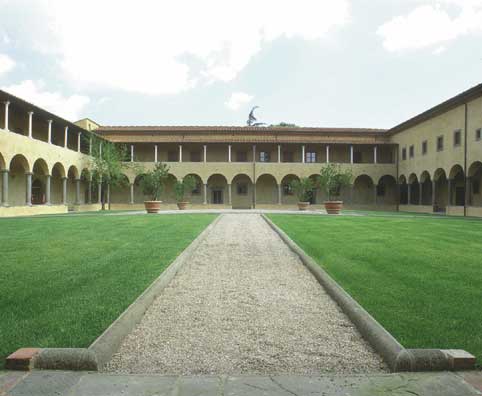 The monastery church was converted into a hotel, managed by the Foundation in 2000 but owned by the City Toniolo. The church is located near the Congress Palace.

The picturesque church called in Fossabanda, because of the ditches in the neighborhood, already existed in the thirteenth century, but was rebuilt in 1325 according to the forms today. The adjoining convent was the first of the Dominican Sisters, who left in 1331 because of frequent wars, and then the Franciscans Minor, who still occupy it. The monastery consists of a large square cloister, surrounded by a colonnade of arches on the ground floor and another on the first floor consists of white columns that directly support the roof. The lower facade of the church is red brick, with a columned portico of the ‘400 and semicircular arches of white marble. The interior has a nave with two side chapels and preserving paintings of ‘600 – ‘700.