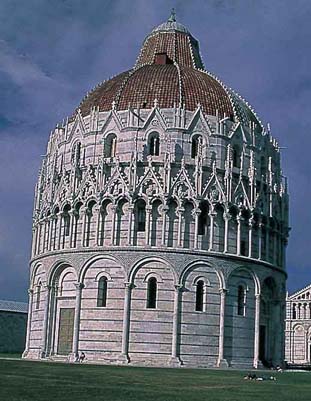 Hours: 10:00 to 16:30 from November to February;
March and October 9:00 to 18:30;
8:00 to 20:00 from April to September;
closed 1 / 1 and 25/12.
Admission:  5,  2 small schools.
No reductions for non-school groups. From the railway station or shuttle bus No. 3 A.
The construction of the baptistery was begun in 1153 by Diotisalvi, architect of the church of the Holy Sepulchre. The monument was rebuilt in 1278, as revealed in an inscription located between two pillars inside the Baptistery. Lack precise information on the progress of the work of the Baptistery and the way in which it was built in its present form. The order of arches surrounding the Baptistery is decorated with heads and sculptures attributed to Nicola and Giovanni Pisano and believed to be among their most important works. At the center of the monument is placed and the beautiful baptismal font near the altar stands the pulpit of 1260, by the great Nicola Pisano.
The pulpit
The pulpit was sculpted between 1255 and 1260 by Nicola Pisano, the father of Giovanni Pisano, with scenes from the Life of Christ, five panels on the parapet, while in correspondence of the columns are represented others who symbolize the virtues. The scenes on the pulpit, and especially the figure of Hercules naked showing well as the influence Nicholas made it a classic precursor to the Renaissance. We must remember how in the size that is in the shop of Nicholas has formed the elite of the sculptors of the Italian Trecento-Two, beginning with Tino Camaino and Arnolfo di Cambio.

The interior is surprisingly simple and free of decorations, also has an excellent acoustics.

The octagonal font and placed on three steps to the center dates back to 1246 and was built by Guido Bigarelli Arogno by then belonged to the diocese of Como. The bronze sculpture of St. John the Baptist in the center of the source is the work of Italo Griselli egregious.

It has a curious cone dome, like the church of the Hospitallers in Pisa, of the same architect, that covers only the inside turn of pillars (the construction method for a hemispherical dome or polygonal large was almost unknown at the time). The project would be to cite Diotisalvi architecturally both the Dome of the Rock (then considered to be built on the ruins of the Temple of Solomon) on the outside, the Anastasis is the Basilica of the Holy Sepulchre on the inside, both in Jerusalem. Later the work was continued by Nicola and Giovanni Pisano that changed the Baptistery in the Gothic style with the loggia and the hemispherical dome which conceals the pyramid.

The dome on top with a statue of St. John the Baptist were made much later. The Baptistery, originally had an opening in the ceiling through which the light illuminates entered the baptismal font. In other baptisteries oldest such opening was used to fill with rainwater that source, but it is not the case where the source of Pisa no drains: the baptisms at the time were already made in a manner similar to the current through small tanks placed along the edge of a source who was, then, purely symbolic.

It is the largest baptistery in Italy: its circumference measuring 107.24 m, while the width of the masonry at the base is two meters and 63 cm, height of 54 meters and 86 centimeters. The dome is covered with red tiles to the sea and lead plates to the east. Probably because of the difference in coverage is to be found in the lack of money, as well as the absence of frescoes on the ceiling, however, that had been planned originally.
The portal

The site, opposite the Cathedral facade, is flanked by two bare columns. The lintel is divided into two levels, the lower back episodes of the life of John the Baptist, the top shows Christ between the Virgin and John the Baptist between angels and evangelists. Two pilasters at the sides of the portal bear the cycle of the months

The Baptistery is, like many other buildings of Pisa, slightly tilted: the slope relates to the east towards the Cathedral.